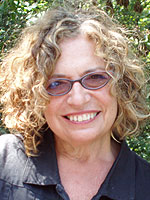 Christine Noschese, Assistant Professor of Audio/Video/Film, (M.A. Goddard College) is a writer, director and producer of both narrative and documentary films. She is currently working on a documentary, The Steppers: Movers and Shakers, about a group of women in their seventies and eighties who formed a dance group and perform in New York. She continues work on a 10-year project, Intimate Projections, which combines both narrative and documentary filmmaking.

Her films include June Roses, which premiered at New Directors/New Films. Her documentaryMetropolitan Avenue was broadcast nationally on PBS, on Channel Four in Great Britain and had a theatrical run at the Film Forum in New York. Over 2,000 copies of the film have been distributed by the John T. & Catherine D. MacArthur Foundation.

In addition to her independent films and videos, Christine has produced and directed educational videos for unions, educational institutions and non-profit organizations.

Christine was a Directing Fellow at the American Film Institute Center for Advanced Film and Television Studies.